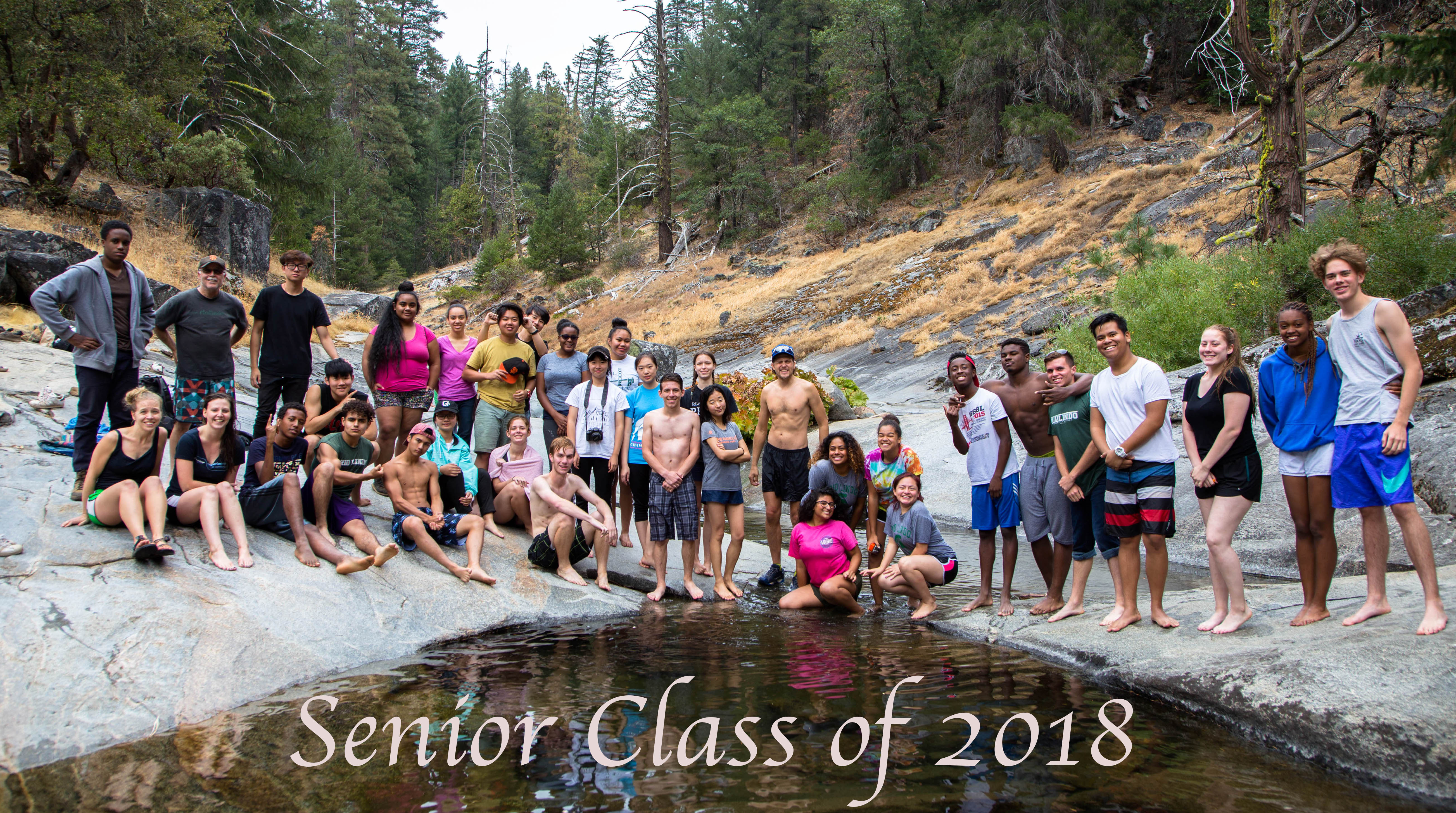 Thirty-one seniors. Five sponsors. One mission; to grow closer as a class while surviving in the wilderness. While all the seniors did survive their adventure at Leoni Meadows Camp, several memories were made that will stick with them forever. 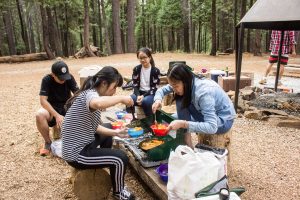 The seniors participated in different events throughout the five day weekend such as hiking, white water rafting, swimming, zip-lining, rock climbing, cooking, and tent camping. All the students were encouraged to step out of their comfort zone and try new things.

“Have a positive attitude knowing that this is the last time you’ll be with your class,” reflected Ruben Valce after returning from the trip.

Camp life was a new experience for some of the seniors. The trip ran on “camp time,” meaning there was no set schedule. Dedicated sponsor and school counselor, Renee Brassington, gained the reputation of waking up all the sleeping seniors. Once everyone pulled themselves out of bed, they met by the campfire for their daily dose of water. In order for the students to stay hydrated, they drank a quart of water each morning before starting any activities. While they were drinking, the seniors reflected on the trip and the experiences they had already encountered. During this time of reflection, the class was also encouraged to pray and spend time with God. After drinking and thinking, breakfast started. Certain groups were assigned to prepare food for everyone, while others cleaned up. 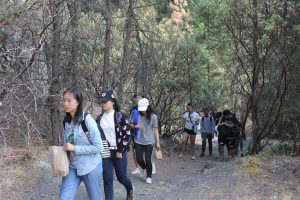 At Leoni Meadows, the seniors rode a zip line, swung on a Giant Swing, and maneuvered through an obstacle course in the lofty tree-tops. By being assigned to random groups, the seniors couldn’t just hang out with their typical group of friends; they had to learn to work with other classmates. Some of the seniors thought this way of facing fears with people that you aren’t as close with was an effective strategy to bond. New friendships were made that will continue to grow throughout the school year and break the ties of the status quo.

Walking and hiking won the award for “least favorite activity” during Senior Trip. The seniors had to walk or hike to get to any location on the Leoni Meadows property. On Sabbath, the group took their longest hike to the Cascades, a series of icy waterfalls with deep pools at the bottom. Not wanting to drive the bus down the narrow dirt road, the seniors were again faced with the reality that they would have to walk. After getting “lost,” walking back towards camp, getting told they were going the right way in the first place, and eventually finding the icy water, the seniors were exhausted by the word “walk.”

When asked to give advice to the underclassmen senior Eunice Moran said, “Bring band-aids for blisters.” 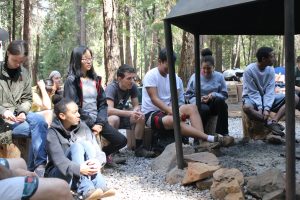 In the morning, afternoon, and evening all the seniors spent time building friendships and bonding. Since phones were taken away at the beginning of the trip, no one had the ability to take pictures. Even though there were a few cameras, the seniors had to take mental photographs so they could remember every detail of their trip. Furthermore, since there were no phones, most of the students had no idea what time it was. Once the sun set, the seniors sat on logs around the campfire and socialized. Many seniors thought it was really late when they went back to their tents, but they later realized that they had been going to sleep at eight or nine p.m.

Just like in the morning, the group had evening worships. Different seniors shared worship talks that made their fellow friends reflect about the day and God’s part in their lives. On one such occasion, Rylan Chamberlain shared a poem that he had written over the course of the trip.

Stuck up somewhere
In the middle of some what nowhere.
Having only what we prepared,
Some to keep and some to share.

Five days of tents, hammocks and log chairs.
For lunch a PB&J sandwich.
The only views at night, tree-tops and stars.
The only way home, a bus and two cars.

Mosquito bites, soreness, burnt food in saucers,
Tree-sap, frisbee to the head, smoke filled joggers,
All a part of the group’s struggles and toils.
Teenagers wanting to go home as quick as water boils.

But in accordance to the vast affairs,
Some have found the strength to hustle and care.
Waking up to fridge-like temperatures,
For the sun to come like tree-top vultures. 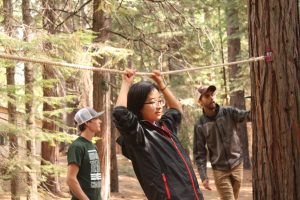 Others sleep alone.
Some say “forget it,”
I wanna sleep at home.

Long walks on hot dusty trails;
Some run ahead to let others be the tail.
They jump into the icy water
Only to scramble out onto hot rocks.

But of all the turmoils the group disliked the most
Was the separation from a device,
That they didn’t need said the host.
Disconnect to connect? They couldn’t see the way.

Warily pleading,
Counting the days down from five,
Trying to find the reason
To those few days survive.

Day to day they bonded,
Their meals more than Ramen.
And by a few days into it,
They found a lot more in common.

They all seem to get along,
Better than they did before.
Now every night they sing a song
Before closing the tent door.

Happy smiles and warm eyes
On each face surrounding the fire.
Hugs full of love and energy,
You couldn’t tell that they were tired.

At the end of this trip memories will be made,
Ones to keep and others throw away.
But the most important thing to know
Is what has changed you today?

As for me, I enjoyed every moment
Getting to know the people close to me that I value important.
Because it isn’t the things we possess that makes us above each other,
But the love we share that binds us as sisters and brothers.

So from these few days
Spent close together,
Think about the small moments we have had
To make memories that last forever.

Don’t think about the times of disgust, 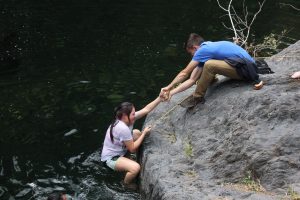 Keep the good times eager.
You never know, this could be the last time
That you are with a group called “seniors.”

Sunday morning, the senior class packed up their tents, hammocks, food, supplies, and luggage and headed towards the American River. White water rafting was the final excursion for the senior class. With five to six seniors and a guide in each raft, the seniors buckled their helmets for a rapid close to their trip. The four hour ride on the river was far from relaxing. Seniors and sponsors alike were yanked off the raft and sucked into the white water. Once everyone was safely ashore, many seniors confessed that white water rafting was a lot more fun than they thought it would be.

Senior Trip is now a memory for the senior class of 2018. Many new and scary activities were tried that expanded the comfort zones of students. Friendships were also made that will continue to build for years to come. With everyone safely back on campus, only the seniors will really understand what happened during the five days of Senior Trip. 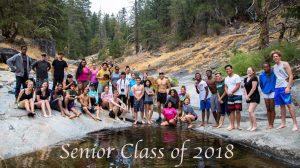